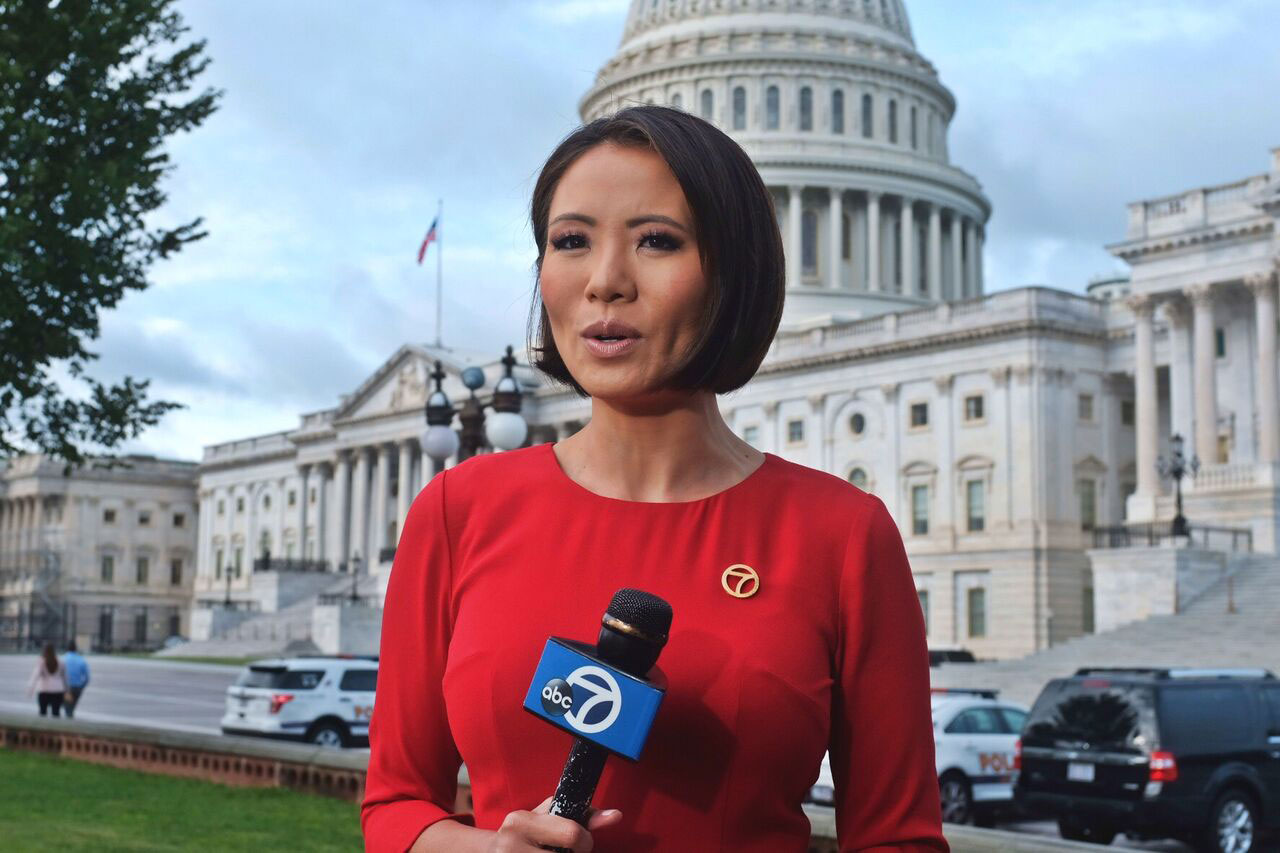 Q:  How did your career start as news anchor?
DL: By a stroke of pure luck!  I had always wanted to be a reporter, then a network correspondent before the age of 30.  This was the career path I had carved out in my head.  But during my first on-air job in tiny Springfield, Massachusetts, (market 109) just a year into the job, somehow, my agent got a call the ABC station in Kansas City (market 33) and asked if I wanted to try anchoring.

Having never anchored before, and wanting to keep it a secret, a friend of mine from a competing station snuck me into their studios after hours to record a demo using the day’s old scripts. When I got the job and first sat down at that desk, (much to the chagrin of my much older, experienced, talented co-workers) I made a lot of mistakes but learned so much. All it took was for one person to believe in me, someone who thought I had talent and just needed the experience and skills.  He laid the foundation for what I do today, and I wouldn’t trade it for anything else in the world.

Q: What is a typical day like for you?
DL: After working nights most of my career, I’ve discovered unless you are regimented on waking up it’s far too easy to sleep in until noon! So, when the alarm goes off, usually around 8 I immediately get on my phone and scroll through social media and catch up on the big news of the day. That keeps me from going back to sleep.

In the news business you never know what your shift will be depending on the day...and that some weeks I work day shifts and night shifts and the occasional early morning 3am shift!The hours before my shift starts at 2:30 or 3 pm, I try to be as productive as possible. This week, I’m meeting with the Asian Realtors Association of America to go over a speech I’m presenting for their yearly gala.Other days I meet up with friends for lunch since I’m at work at the time most people go out to dinner and drinks. I’ve been a part of an online food group called #FoodTravelChat for several years and for the San Francisco members, we explore new places to eat and we jokingly refer to ourselves as “those people” who take photos of our food to post on social media later!

As soon as work begins, it’s go-go-go. For reporting shifts, I’m in assignment meetings, making calls, in the field grabbing interviews and trying to juggle many tasks at once. A photographer friend of mine introduced me to a device called a Hot Logic, which is like a portable oven the size of a lunchbox. I use it to eat while I write my story script and web script. Depending on what I’m covering, I could be live in the 11 pm newscast. The fact you never know where you’ll be on any given day is what makes reporting exciting. On anchoring days, it’s equally as busy, but inside the station. There is proofing and writing of scripts. Recording teases and tracking story packages and calls to set up stories for reporting days. Since we have a lot of newscasts at ABC7 during the week and on the weekend, I usually use my Hot Logic at my desk for dinner or we’ll all order delivery. Postmates, Caviar and Uber Eats are a must some nights!

Some evenings, we’ll have special guests visit the studio. I’m involved with a group called Best Buddies, which promotes friendship, job creation and confidence for those with physical and developmental disabilities. Recently, a generous donor spent $1600 to sponsor a group of 10 Buddies and their family members to watch one of our newscasts. My co-anchor Eric Thomas and I, along with meteorologist Drew Tuma spent time answering their questions, showing them the technology of the studio and just spending quality time eating cake with them. These evenings are very special to me and part of why I love what I do!

After getting home at around midnight, (or later if I’m reporting and live somewhere far away from the station) I stay up another hour or two reading, unwinding with all of my DVR’d shows and eating my 4th meal with my husband. He is a professional poker player and has a flexible schedule, so it’s good he’s a night-owl too!

Q: Can you share with our audience one of your most memorable events you’ve covered?
DL: My first day on air at ABC7 was when the North Bay Fires broke out. As soon as I stepped into the newsroom, a colleague thrust a big red bag my direction and inside was my fire-retardant suit, a face mask, and hard helmet. I’ve covered tornadoes and hurricanes and all other natural disasters...but a wildfire, which grows, and spread is unlike anything I could ever imagine. I met so many people those first few days who had experienced tremendous loss. A man, covered in ash, dazed and wandering the streets. A family frantically packing up their belongings to evacuate. A woman who had lost a dozen horses to the flames. I still keep in touch with some of them today, and it’s been encouraging to hear how they’re starting to rebuild and piece their lives back together.

The funniest? A time in Kansas City when a man was arrested after licking a frog, hoping the animal’s poisonous venom would create a hallucinogenic experience! 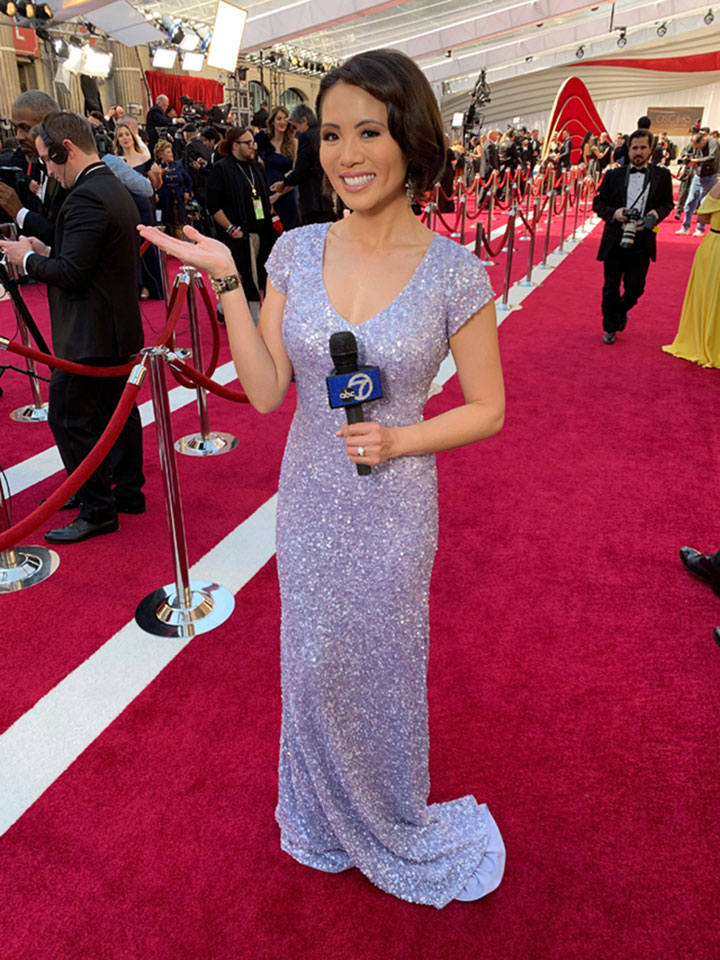 Q: What’s one lesson you’ve learned in your career that you can share with our audience?
DL: That you don’t have to be the smartest, the most talented or most skilled in order to thrive in your career. (I’m definitely not and have the grades from school to prove it!) It’s about being able to communicate, not only with an audience but during those day-to-day “microinteractions” in the workplace and also with yourself. Being comfortable in your own skin to have the confidence to tackle any challenge that comes your way. This is the theme of my book “untitled” (McGraw-Hill 2019) coming out this fall.

Q: Which woman inspires you and why?
DL: Do I have to pick just one?! The cliché thing to say would be my mom but she is truly remarkable in many ways. My mother grew up in Taiwan and because girls were not viewed as valuable like boys, she was given away to another family. When that family rejected her and gave her back, can you imagine what that must do to you psychologically? Later as an immigrant she faced tremendous racism and adversity in the US. I’m amazed by her work ethic and grit to get things done and to take care of our family despite all of the hurdles.

When it comes to TV news, I’ve had the fortune of working with some remarkable women in my career. Sonja Gantt the former main anchor at the NBC station in Charlotte taught me how to lead a newsroom with kindness and empathy when I took over the 11pm newscast from her. She taught me every has a season and a place to shine. Lyanne Melendez here at ABC7 News/KGO-TV is inspirational because she’s reported all over the world for CNN and is tough as nails, knows who she is and has been a cheerleader for me as the relative new kid at KGO.

Q: Do you have any advice you can share for those women who may want to pursue a career in broadcast journalism?
DL: Don’t be discouraged by the “no’s”. Let them fuel your passion to strive for something better. This is a subjective business. It’s not like mathematics, where there is always a clear and defined right or wrong answer to an equation. In TV news, you could be a Pulitzer Prize-winning journalist, but if one person doesn’t like your voice, and you don’t get the job, does that mean you’re not talented? Absolutely not.

I’ve had a lot of success, but behind it also came a lot of rejection. But it’s those who said “yes” and took a chance or believed in me that helped me get to where I am today. 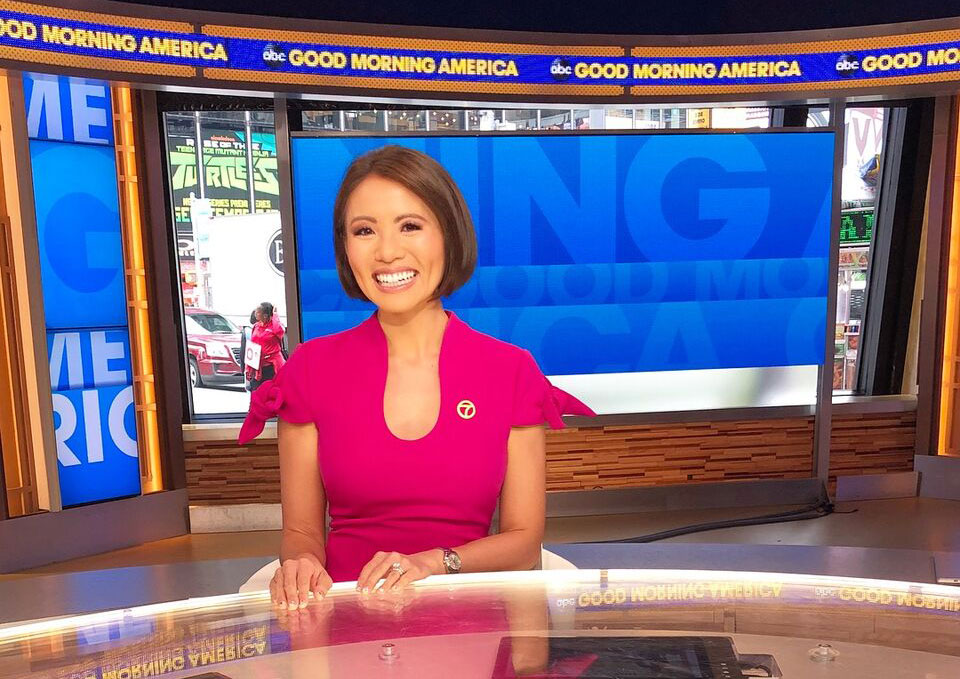 Q: What are some of the challenges you feel women face today?
DL: What AREN’T some challenges women face today? An important topic I speak about often at schools and at women’s conferences is being “ok” with who you are and understanding you are “enough”. There is so much pressure to look and sound a certain way. To fit the standard of beauty and success. But unless you wholeheartedly grasp the notion of acceptance of who you are, you cannot effectively emote and communicate with your audience, your colleagues, the environment around you.

Early in my career, I was very insecure. Unaware of my unique talents as a person. But during this time, I was portraying this image of perfection on TV. It was not authentic. My advice is to never let others take away your confidence. Your sense of self-worth. It empowers you to pass on these lessons to others and empower them. If you remember what that is, you’ll be untouchable.

Q: What advice would you give to young women who want to succeed in the workplace?
DL: It’s why I partnered with my literary agent at Full Circle Literary and my publisher, McGraw-Hill to write a book about communication. It’s number one. Unlike in say, college, workplaces are filled with people from all different backgrounds, all different ages. The bringing together of a diverse workforce means each person can bring inherent skills and talents to the table. But it also can mean breakdowns in communication style. This breeds stress, drama, and frustration. You don’t have to be the smartest, the quickest or the most talented. But when you know how to listen and react appropriately with those you interact with, you’ll have a more productive, harmonious work environment.

Q: What do you like the most about living in the Bay Area?
DL: Hands down the diversity, which is reflected in the thinking, the lifestyle, and the FOOD! Every city I’ve had the opportunity to work in has shaped who I am today, and I’m so grateful for those experiences. But San Francisco has a vibrancy like no other, which makes me feel alive.